Jaggie's Adventure of a Lifetime!!

I am so excited that Michelle found the camera and I can tell you about some of my fun adventures at the International Quilt Market in Houston last month! OMG! I had such a blast!

First of all, this was to be the first year that we we not going to have a Bear Thread Deisgns booth because Veronica was really excited to walk the event and meet new people, and hopefully find some new artists. But our friends at Bigfork Bay Cotton Company had a last minute issue and couldn't make it to Market and asked if we could step in. So Veronica called Michelle (whom I live with most of the time because her little boy plays with me.) She asked if Michelle and I could sit in the booth while she walked around as planned. Of course we were excited to help!


We met a lot of new and returning friends that weekend, and I'll tell you more about that in a later post, but my adventures those two days were amazing! You would not believe all of the fun things there were and new friends. Here are some of the things I did ...

I made a new friend, named Popcorn at the Quilting Treasures booth. We hung out in their fabrics, just enjoying all the wonderful colors and talking about all the quits we'd make if we were going to hibernate for the winter, but we have too many projects to do, so sleep will have to wait! Michelle's favorite fabric was one with sock monkeys on it, but I prefer bears myself ... and yummy berries! 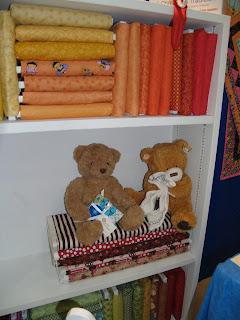 Moda Fabrics had a huge booth with lots of fun things. I got to explore this fun trailer, it really made me want to go on a camping trip. I even spent a little time at the campfire roasting marshmellows and tried to nap in one of the pretty chairs but Veronica said it was time to work. 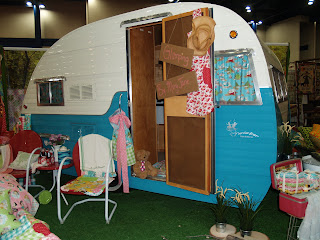 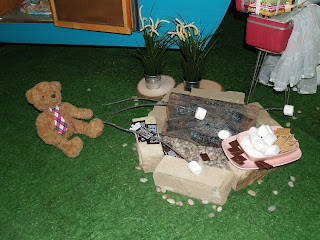 Does this Art Kloth make my tie look pink? Just joking! We really love Jennifer Lokey and her Art Kloth. I raided her booth while she was out and about and had lots of fun, then stopped by later for a few hugs from Jenn. Just can't get enough! 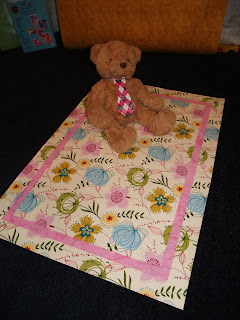 Me and My Sisters Designs has a really fun booth, but their jar of sweets is what I kept going for. Those sisters sure know how to capture a bear's heart! 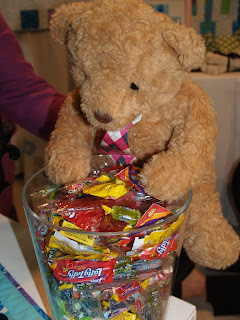 The whoe weekend, I saw people walking around with this fun pink shirts and kept thinking I wanted to find out where they were from. I fianlly ventured over to the Kangaroo Kabinets booth and though they were out of shirts, I met a few of their staff members. These friendly kangroos and I chatted about their cabinets and all which ones we have in our personal craft rooms. Which would you choose? 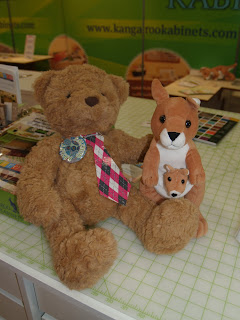 While I was wandering about, I discovered this amazing well at the Gutermann Threads booth.  After a little investigating discovered there were no fish, but I did make a wish! Let's see if my maple leaf quilt gets finished now! 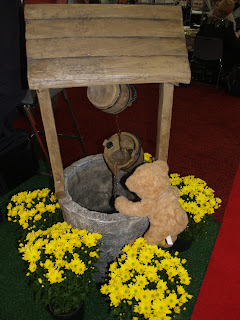 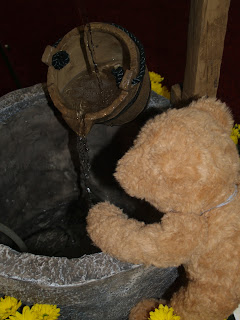 The girls at the Paper Pieces booth were A LOT of fun! I was at their booth for a while. They gave me a bit of a make over and there was lots of laughter. These girls were hilarious! 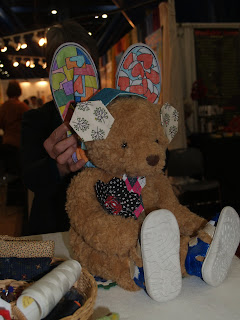 We really had a lot of fun at Quilt Market this year and I'm so excited Veronica let me tag along. I invite you to visit some of friends and tell them I sent you!

Posted by Bear Thread Designs at 10:29 PM No comments:

May We Never Forget the Price of Freedom 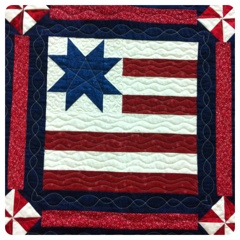 While only one day of the year is dedicated solely to honoring our veterans, Americans must never forget the sacrifices that many of our fellow countrymen have made to defend our country and protect our freedoms.


On the 11th Hour, of the 11th Day, of the 11th Month, in towns and cities all across the world; men and women from all walks of life will take a moment out of their lives, to stop, reflect on, and remember all those that fought and died in the name of our freedom…

Happy Veteran's Day and Thank You

to Servicemembers Past and Present 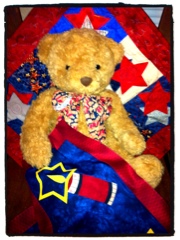 Posted by Bear Thread Designs at 8:52 PM No comments:

Shop of the Month: Jaggies Gambles On New Friendships 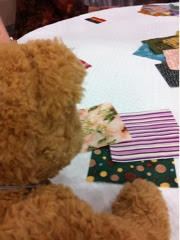 This is our inaugural post about the 2012 International Quilt Market and Festival! I was so happy Veronica let me tag along. This bear has such a good time!

I met lots of new friends and had many adventures. One of my favorites was hanging out and playing dice with the ladies of Stitchin' Tree Quilts, located in Harlan, Iowa.
Stitchin' Tree Quilts is home of Trader's Dice, a game that has much more laughter than any Vegas game!

Owner, Teresa Coenen explains the game. "Trader's Dice is a game that you can play with three or more people -- the more the merrier. Roll the dice, trade to the left, trade to the right, trade across the table, or steal from the kitty. You can trade anything: fat quarters, charm squares, jelly roll strips, patterns, thread, you name it. And you don't have to be a quilter to play. This game can be played with scrapbookers, knitters, playing card collectors -- any collector can play."

"I created the the game as a way for everyone to win. My experience had been that several of our ladies refused to play winner takes all games," she explains. "I'm a retired educator, so I used to buy blank dice at a teacher supply store and made my own dice. Typically groups would want me to leave the dice with them. Eventually, I had the dice made. It's been fun!"

It sure was fun! There were visitors waiting in line for their turn to play, so as you can see it was quite the hit! 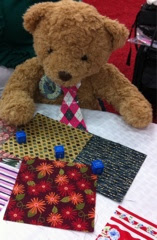 As you can see I was quite a pro when it came to rolling the dice. Though I didn't win, the ladies did share their winnings with me! Ah, the ladies love me! 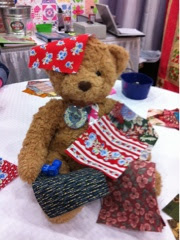 Dice aren't the only fun things you'll find at Stitchin' Tree. The shop, which opened in 2006, even have their own quilt line which includes quilt patterns, blocks of the month and kits! They also have PinPals. "A PinPal is a magnetized pin catcher that you wear on your shirt/lapel, collar or sleeve. Made of sturdy plastic, this pin catcher will hold pins, needles and small scissors. It's perfect for when you are doing lap work, and will save you from losing your scissors down the crack of the chair or sticking pins in your collar or sofa arm."
It's safe to say Stitchin' Tree has some really great treats!
Stitchin' Tree also provides some great services like, quilting services, T-shirt quilts, and has a few quilts for sale as well! They also have free tips and patterns on their website as well as a list of classes and workshops, so check it out! (If they had a nuts and berry buffet, I would be moving in!)
Stop by and check out the Stitchin' Tree Quilts' website, or if you are in the area stop by for a visit and tell them "Jaggie sent you!". They are located at 616 Market Street, Harlan, Iowa 51537.
We'll have more of my adventures from Quilt Market and photos of our booth at Quilt Festival soon, so come back and visit!

Posted by Bear Thread Designs at 12:01 PM No comments:

Email ThisBlogThis!Share to TwitterShare to FacebookShare to Pinterest
Labels: IQF, IQM, Shop of the Month

It's Done and Over With! Now We Can Move Forward! 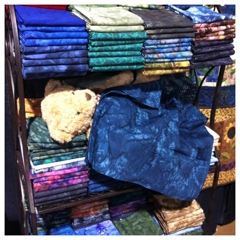 {sigh} A very tired Jaggie here ... It's finally over! All the hard work, the preparation, the meeting and greeting - the decision-making done. It's been a long hard road, but it's our favorite time of year. Now we look forward to what lays ahead ... Yep, Quilt Festival is over and we can now start working towards next year's adventure.

Oh, did you think I was talking about the election? Well, while we are glad that is over too, all I'm going to say is I voted for more naps and berries, but the results aren't in yet. Mmm ... berries ...
Well, the months leading up to Quilt Market and Festival are very busy, and then we go right into the holidays from there, so the whole last quarter of the year is prestty chaotic for us. But now that things are settling down, we hare hoping to be more regular with our blog and Facebook. A big "thank you" to all of our readers and friends for your patience and understanding. You can look forward to some posts about my adventures at Market and Festival coming soon. For now, I'm going to nap in the fabric room and hope Veronica doesn't find me!

Posted by Bear Thread Designs at 8:45 AM No comments: 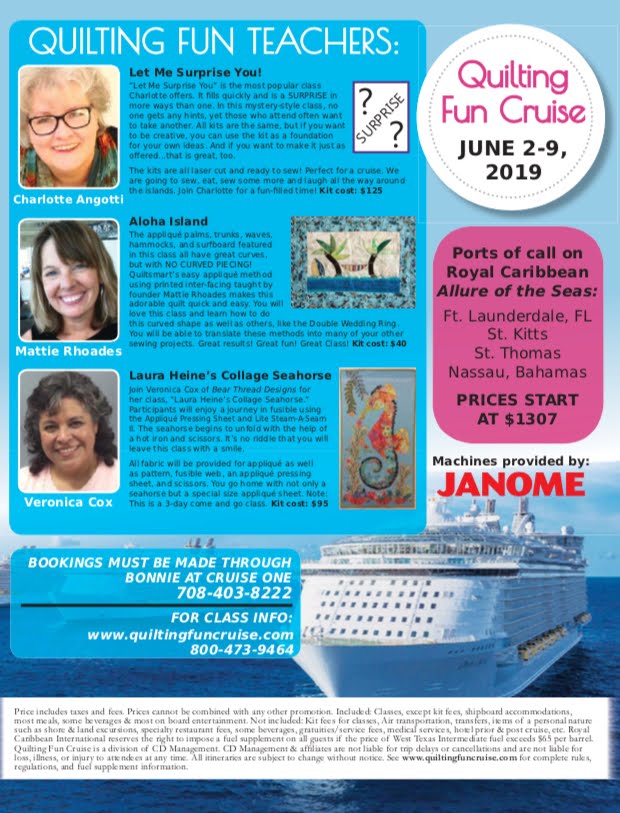